Who says that you can’t learn while playing video games! There sadly aren’t a whole lot of video games out there made specifically for people learning Japanese, but there are some games out there targeted to Japanese learners. The system I’ll be talking about today is the DS Lite which is an older system I know, but if you have a 3DS these games will also work on it even though the new 3DS is region locked. If you don’t have a DS Lite and  want one you can get a used one on eBay for about 20$, now with that out of the way on to the games!

The first game I want to talk about is called My Japanese Coach, which is a great game for learning the basics of Japanese. It takes you through courses from a beginner level to a more intermediate level, with short lessons. I would not only use the game to learn as it is not that in depth with explanations, but it is a great study aid.

It will teach you Kana through mini games using the vocabulary in the lessons. Using the DS touch screen you are able to draw the kana and learn the correct stroke order. Their are also mini games for learning the vocabulary words (which are pretty addicting). Another great thing is that at the beginning of each lesson you are giving some cool facts about Japan and cultural information. So there’s lots of learning to be had here.

The next game I want to talk about is a Japanese title targeted to Japanese students called Kageyama Method: Tadashii Kanji Kakitori-Kun. It is a game that is great for learning kanji, but it isn’t for an absolute beginner. As the whole game is in Japanese you will need a good understanding of hiragana to really take advantage of it. Every single kanji in the game has furigana (hiragana above the character) so when you come across a word you don’t know you can easily look it up. 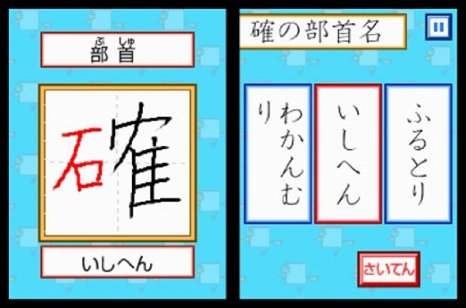 This is a great game to use as you start learning Kanji, it will help you to learn the meaning of the character as well as the correct stroke order. Just have your dictionary ready for when you come across a word you don’t know! These games are older now so I’m sure they will be hard to find in a store, but you can still purchase them on ebay and amazon. Ganbatte!