Skip to content
HomeMr. Nietzche in the Convenience Store ep. 3

Yay, on schedule this time *pats self on the back*.  Happy Memorial day to those in the states, to everyone else I hope your enjoying your Monday. Like the other reviews this review will have spoilers for the episode, so watch it and come back. This episode starts of with Matsukoma  admitting that he still likes plush toys and figures (who doesn’t?). Nii says that he didn’t think he would be the type to collect, but rather the type to not have a real job, which hits Matsukoma right in the gut. We also learn that Nii’s hobby is music and he plays the wooden fish, I have no idea what that is. Apparently in the manga they actually show his band, I hope that they show it in the show as well that would be funny.

Next Matsukoma is in the back room watching Nii on the security camera and is tortured by the fact that he can’t hear Nii’s conversation with a foreign customer. Initially when I was watching this with no subtitles, I was like wait why cant I understand them?! then I realized that they were speaking German haha yeah. I assumed they were talking about normal store stuff. But apparently they were talking about Nii’s wage and what can you do with 20 yen (nothing). Of course Matsukoma couldn’t add anything to the conversation and he retreats back into the office. When the foreign customer calls Matsukoma stupid and Nii laughs I thought was pretty mean, especially since Matsukoma tries so freaking hard to be nice to Nii, just saying a little cold bro.

The manager comes across Matsukoma depressed after being rejected during a job interview, poor guy. The manager tries to cheer him up but utterly fails by pointing out all his weak points instead. After realizing his error he tries to fix it by telling him to change his way of thinking in interviews, with a few good smacks to the face of course, for emphasis.  Matsukoma then decides that what he really wants to do is go into space, just like Amuro. Yes Amuro, the one from the first Gundam series! You see since he’s good at building plastic models he’s sure he could build a real Gundam, I mean it has to be the same right. Then when he awakens as a new type he’ll defeat the evil aliens that threaten earth. This was the funniest part of the whole episode. Nii walks by and says he believes that Matsu can make it, I’m starting to believe he is just making fun of him.

After, Watari, Nii, and Matsu (yes his name is Matsu now because I’m tired of writing Matsukoma) are in the back room, were Watari talks about money of course. He says that if he were to win the lottery he would try buying people, which is wrong in so many ways. Matsu tries to fix it by saying Watari would start a business and give people jobs right, but nope he keeps going with his nefarious thoughts. Nii puts an end to his scheming most likely because it was starting to piss him off, and states that the odds of him winning the lottery are next to none. So what is left for Watari, but to commit suicide ( ridiculously extreme reaction right?!) Matsu stops him and Nii says that he can’t until he becomes a monk, so that he can be his customer haha. 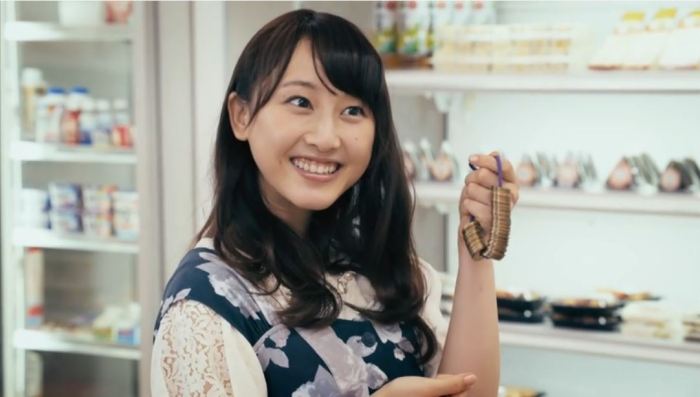 Then Kaede shows up to creep on Nii some more. Her plan this time is to spend more time with him at the register, by sending lots of packages home. But you see this plan is two fold, she gets to spend more time with him and he gets to, wait for it, see her address gasp! Her hope is that he will just show up to meet her parents, because… why not. Or show up at her house for a late night visit *wink, wink* yup nothing creepy about that at all. By the way she keeps all the change he gives her on a bracelet…yup. All though I will say, I think this is one of the funniest scenes with her, because you get to see Matsu giving her all the yup that’s not normal faces. Also what is she sending home you might ask, Salt because you send salt to your enemies, my second favorite line from this episode other then “I want to go into space just like Amuro”.

Next we meet Kuruda (yay new character), who at 1st glance seems like a nice and normal dude. However after dealing with a rude customer, Matsu finds him stabbing the crap out of a bottle and while wishing for the customers death, yeah hardcore. This scene scared me at first because it was so freaking unexpected, It like the show just took a drastic turn, but it turned out funny in the end. Nii who was there all along, even though no one noticed him tells the young man to wish for good customers to return and to wish for the garbage to never return while bowing. He then instructs him to keep stabbing the bottle, except this time more heart haha. Matsu quickly ushers Nii away because hes a bad influence.

My impressions of this episode were a little meh, even though I feel like it was funnier then the second. I don’t know maybe I was just expecting more. Its just that the first half was not as funny as the second half, which was really funny. The part about wanting to be a Gundam pilot was just the best. I also think Kaede was much funnier in this episode then the past episodes, considering in episode 2 she was unconscious. I’m curious to see if Kuruda is going to be an important character, I think him around following Nii’s teachings could be funny. I’m looking forward to episode 4, hopfuly by episode 5 will we see even more new characters.

P.S. Keep watching after the credits for some funny outtakes of the manager from episode one, it was seriously funny. Now I need to go back and check the first two episodes to see if I missed anything!