The episode starts of with Tanaka and Ohta standing in front of a Wc Donalds (McDonalds in case it wasn’t obvious). Ohta really wants to try their new limited edition strawberry sundae, however Tanaka doesn’t like the fast food restaurant atmosphere and is worried he’ll feel to much pressure. All that changes though when he sees that you get a mini toy cleaner with a happy meal, I understand that temptation very well.

Inside the Wc Donalds Tanaka makes his order but is disappointed when they don’t have the toy he wants and only orders a milk shake instead. Sensing how giving Tanaka a milk shake to carry could go wrong, the female cashier decides to bring the drink to his table instead. That’s a really nice Mc Donalds, mine isn’t bring you anything.

The two then watch the same female employee clean the tables behind them. As they admire her ability to work a fast food job, she thinks that they are mad at her for not having the toy, does Ohta look that scary in their world? Him and Echizen should team up, they would be the most kind hearted gang ever. Later when the two of them are leaving the same employee is outside, Ohta and Tanaka compliment her hard work and she realizes that the two of them are actually nice people.

The next day they end up back at Wc Donalds because Ohta wants the new limited edition desert. Once seated inside Ohta realizes that he has forgotten his phone and immediately heads back to school to retrieve it. He leaves Tanaka to guard the table, a young girl with blond hair comes across their table and is shocked to see a limp Tanaka. The young girl happens to be there with Tanaka’s sister and she explains that the lazy person is her brother. The young girls name is Saya and she is Rino’s friend (Tanaka’s sister). Saya tells Tanaka that she also has an older brother (I wonder who?)  But he looks like a gorilla and Tanaka looks like a prince. In wanting to compliment her brother Rino pretty much insults him instead by calling him a bean sprout with zero physical prowess. 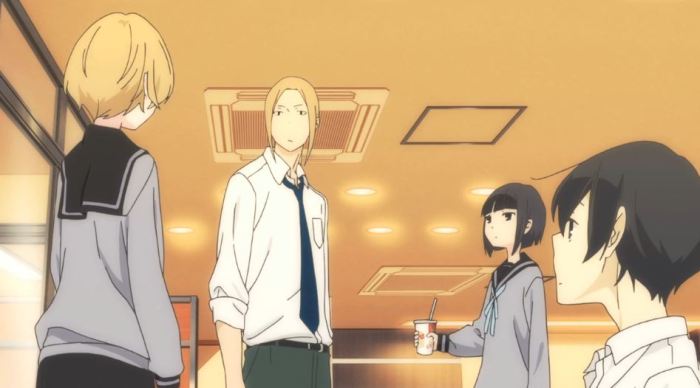 Tanaka actually got the toy he wanted this time. I want to see him use it, it doesn’t actually clean does it? Rino goes to buy a drink leaving Saya alone with Tanaka . He tells her that he doesn’t think that he is a good big brother because he can’t protect Rino (aww). Ohta shows back up having been delayed by an old lady and a lost dog. He is surprised to see Saya who he explains is his sister ( no surprise there). What a coincidence that their siblings are also friends, I wonder what the relationship between Rino and Saya is like. They part ways to go home, Ohta notices that Saya had fun as they walk home. I imagine him to be a good older brother. As Tanaka amd Rino walk home, Rino wonders what to do now that she knows her rival is her friends brother. Side note: Is that toy cleaner actually doing anything I kind of want one now.